In Broad Channel, a story of perseverance

You are here:
J&B Home Improvement 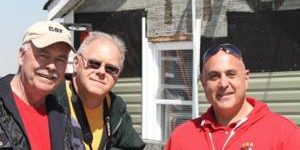 Devastated by Sandy, Iroquois Yacht Club comes back, with some help

Unless you’re looking for it, the Iroquois Yacht Club is not really that easy to find. It’s not even easy to find even if you are looking for it. It doesn’t sit on land, but rather on an offshore wooden platform several dozen yards off Broad Channel similar to a resort in the South Pacific you might ogle on the cover of a travel magazine. To get to the Iroquois Yacht Club, one must walk out over Jamaica Bay on a wooden boardwalk — given the name East 12th Road by the city — and turn left at the end of the “block,” past a number of summer homes. Under your feet are the shallow marshy waters of this part of the bay. Ahead of you are marshlands and distant buildings rising in Far Rockaway. The A train cuts across in the foreground.

It should come as no surprise that this wooden island that is home to the Iroquois Yacht Club was wrecked when Hurricane Sandy slammed into the coast on Oct. 29, 2012.

“We got battered,” said Commodore Terry Horn. “We were just devastated.”

Sandy’s storm surge literally ripped out the floor from underneath the club. When the members were able to make it back to the facility after the storm — by wading through the marsh in hip boots because the boardwalk was wiped away — they found their yacht club in ruins.

The club, which has been in its location for 100 years, had never seen so much destruction. It survived the devastating hurricanes of 1936 and 1944; it survived Hurricane Donna and Hurricane Irene. It survived nor’easters like the 1992 Perfect Storm that flooded most of Broad Channel. But its luck ran out with Sandy.

“We weren’t sure where to start,” Horn explained.

First thing was to rebuild the boardwalk, which they did with makeshift boards, just enough to access the club by foot. Then came repairing the deck, which was washed away in the storm. Then they had to truly rebuild, almost from scratch with little money.

Horn said there was no help from the Federal Emergency Management Agency, the state or the city. He decided to withhold the yacht club’s taxes in order to pay for the renovations. Members, many of whom have long left Broad Channel but still have ties to the area, pitched in to help. Iroquois, founded when Grover Cleveland was president of the United States and Queen Victoria sat on the English throne, was too much of a Broad Channel institution for the neighborhood to lose it.

Bershad, himself a victim of Sandy — his Howard Beach home was hit by the storm surge — is a longtime acquaintance of the Iroquois Yacht Club and its members. When he saw they were struggling to get back on their feet after the storm, he stepped in.

Bershad donated new windows and doors for the facility’s main hall and new siding for the yacht club’s buildings. Last Thursday, under what was one of the first warm sunny skies of spring, Bershad’s workers cut and installed the siding and the yacht club took another step toward normalcy, a year and a half after the storm that almost wiped it out.

“These are good people and this is a good community,” Bershad said. “I’m glad to help out.”

Most of the Sandy damage has been repaired, including the main deck and the floor of the main hall. Horn showed off pictures of what the floor looked like when it was just beams crisscrossing over open water.

“We had an in-ground pool in here,” he joked.

The water line is still evident in the kitchen, which includes oversized ceramic sinks that are nearly a century old. The club’s entire electrical system needed to be overhauled as the main fuse box ended up underwater, though only by two inches.

Horn said the club is planning on having a big season-opening bash in June and said members are looking forward to a normal summer.

“We still got a lot of years ahead of us,” he said of the yacht club.

While Bershad’s workers pulled the old damaged siding off the house, a symbol of the yacht club’s perseverance was unmasked — the letters IYC painted on the original outer facade of the main building, the initials of the Iroquois Yacht Club.

“I never even knew that was there,” Horn said smiling. –